Traffic in the first quarter fell by only 4.6%, but this figure is expected to be greater in April due to the Easter holiday period and the decree to suspend industrial activity

Between January and March, 8.5 million tons of goods were shipped through the Port of Bilbao, 4.6% less than in the same period last year. In the month of March alone, when lockdown began, figures show a fall of 132,800 tons with respect to March 2019. The fall in traffic, palpable after most industrial activity was suspended, was anticipated by the port authorities. “We were expecting a fall, although the figure itself is lower than might have been expected because although the state of alarm has meant that less industrial and energy products are being consumed, this occurred in the second half of March”, the Chairman of the Port Authority of Bilbao, Ricardo Barkala, explained.

In this respect, Barkala anticipates that the fall will be accentuated in April. “The consequences of the closure of non-essential industry will be felt in April. Added to that, Easter is traditionally a time of lower traffic because many vessels and companies do not usually work during public holidays. It is common knowledge that port activity comes to standstill in holiday periods, and the suspension of industry will cause the port warehouses to be filled with traffic that has no way out until activity resumes and demand is boosted”.

Nevertheless, the Chairman of the Port Authority points out that the fall in traffic does not mean that work in the port is not continuing as normal.

“As an essential service, the Port of Bilbao continues to maintain its activity and logistics operations, with all preventive measures taken at all times to protect our professionals. Supplies to our industry and of consumer products are guaranteed. The terminals are operational, and the port community is making every effort to ensure the port operates as smoothly as possible in the current state of alarm”.

As a result of the current crisis caused by COVID-19, the Port Authority of Bilbao has adopted a series of financial and organisational measures for companies located in the Port of Bilbao and for its suppliers. One of these measures is that invoicing of six-monthly land occupation and activity taxes has been deferred for two months, and monthly charges of occupation and activity tax deferred for one month. These timeframes are the maximum authorised by law. 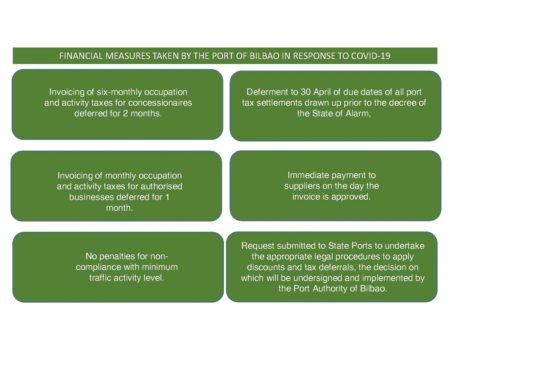 Furthermore, through this video, the Port Authority would like to thank all the professionals working in the Port of Bilbao for their commitment and dedication.

You can find out more about which cookies we are using or switch them off in settings.

Cookie information is stored in your browser and performs functions such as recognising you when you return to our site or helping our team understand which parts of the site you find most interesting and useful.

The website will not work properly if you do not enable them.

If you disable this cookie, we will not be able to save your preferences. This means that every time you visit this website you will need to enable or disable cookies again.

This website uses Google Analytics to collect anonymous information such as the number of visitors to the site, or the most popular pages.

Please enable Strictly Necessary Cookies first so that we can save your preferences!

Please enable Strictly Necessary Cookies first so that we can save your preferences!