In the first half of the year, some 15.3 million tonnes were loaded or discharged in the Port of Bilbao, 1.26% less than in the corresponding period for last year. Nonetheless, the Port Authority expects traffic to increase in the second half, and following the tendency of the last three years, it is expected this year will close positively at around 2%.

The decrease in the first half comes from the fall in liquid bulks such as natural gas and fuel oil, in solid bulks like scrap and iron briquettes due to the lack of activity at the ACB, and in the loss of iron and steel products especially because of the fall in tubes exports after the low activity in the oil sector.

On the other hand, the goods which grow most in tonnes are petrol, the petroleum products group, crude oil, cement and clinker, chemical products and coal and petrol coke.

In contrast, the increase in heavy load traffic is noteworthy. Between January and June, 2,479 pieces catalogued as special transport due to weight, length, width or height were embarked. This figure supposes a 21% increase over the same period last year.

Traffic entering or leaving using the Port’s rail facilities continues to grow. In the first half of the year, there has been a 20% increase in rail traffic which now constitutes 6% of the total; this figure increases to 13% in the case of dry cargo only, which is more prone to use this transport means.

With regard to passengers, the figure has grown by 43%: travellers on the Bilbao-Portsmouth ferry increase 29%, while cruise tourists go up 61%.

With regard to markets, 41% of traffic has its origin or destination in the European Atlantic, which increases 18%, followed by the North American Atlantic in second place, which goes up 3%, and by Central America and the Caribbean with a 13% increase. 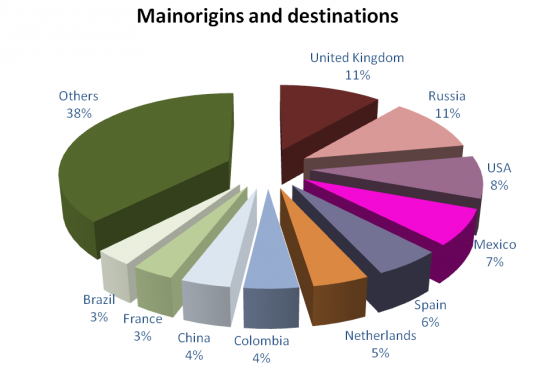 Turnover for the first six months of the year stands at 32.1 million euros, 0.12% up on the corresponding period for the last year.

In 2016, the Port Authority of Bilbao plans to invest 78.1 million euros in strategic projects in order to increase its market and attract new traffic. This is the highest investment the entity has made in recent years, and it must be remembered that the Port Authority is self-financing thanks to its own resources, bank loans, and in specific projects, considered to be strategic, through EU subsidies. Projects in progress or which have been completed this year are as follows: